The Wrath of the Ashbringer 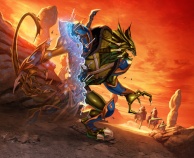 The Wrath of the Ashbringer

Well I guess I might as well introduce myself now that I finally got this account working,

I"m Ashbringer36, my online friends also call me Melke and the people I play that awful MMO called real life with call me Jacob.
Hoping to have some fun talking about a card game that was over too soon and show my support so we might get that season 4 that revealed the rest of the codemasters.

I'm a gamer and a writer, 18 years old and on the way to finishing high school, after a year off I hope to attend a course down in Saskatoon for Video Game design.
In my spare time when I'm not at school or serving up fast food I'm usually at my computer desk playing video games or writing, I'm currently just a fanfiction writer but I hope to hone my writing ability so as to write a really good original work someday.

So that's me, hi everyone

Glad to be here

Okay I shall answer to the best of my ability

Favourite Tribe : Mipedians hands down, I like the assassins play and the way I envision Iflar (wish he got more screan time) makes him an even better leader the Maxxor.
Favourite creature: Oh this one is harder, I'd say Melke because he looks cool and again have this mental image, I could also say Noaz because.... Mipedudim Oasis + Thunder shout equals one shot near anything (while attacking anyway)
So it' tied between Melke because he just seems cool , Noaz cus awesome power and Blazvatan because TORNADOS FOR HANDS!!!!!

Faovurite type of non creature card, I'd have to say my favourite type is Locations, or at least when it's my locations lol.
And just in case I misinterperperated my favourite in each category
Battle Gear : Wind Whip because I had a really powerful Prince Mudeanu whom lack of elements was the only weakness.
Mugic : Tough one but I'll have to say the phanfare (I thnk that's how you say it) of the vanishing.
For attacks: thunder shout cus in my decks it's a consistant powerful.
Location : hunters perimeter: Invisibility being non negatable, nuff said.

Now may I ask you the same questions?

Welcome to the club, join the chat sometimes. I write fanfics too. :d
CSpacian

Hey! Another Melke fan! Welcome to the club. I have to wonder if the Mipedian fans are more loyal or something as I always see Chiodosin around and both me and him are Mipedian fans. I think King A-Game-Darini was also one. Nice to meet ya!
Ashbringer367