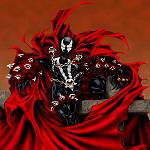 I think we all have a card that we were disappointed with for some reason. Perhaps it was because it turned out nothing like in the show, or it might be because it was never even made into a card. What was that card for you and why? Although there were a few I was initially disappointed with, I think the 1 that stood out the most was Fortissimo. Think of the plays it accomplishes on the show, and then think of its actual effect. This card does not even come close to living up to its expectations.
BlzvSprayTan

On the show and never made it: The generic squirrel dude.. Crellan used him to revive stuff.. I always felt we needed more than 4 generics.

On the show but sucked as a card: the one that makes you huge, it might have been Fortissimo actually, I havent watched the show in years. But still: a mugic that makes you 10 times bigger than the opponent? That should give you a decent advantage as a card.

In the game, and had a cool ability that could've been better: Blaaxa. I ran Blaaxa in a Prexxor Chasm deck of mine for a while, but she her ability was never as cool as it looked.

Fortissimo was the Mugic that made them grow to outrageous sizes, whereas in real life it only gave them 5 in each discipline and 5 energy. Najarin caught me off guard originally. I remember seeing the episode and then I pulled 1 as a Rare and it made almost no sense. Part of me wishes he had been made like a Super with a more powerful effect. As for Tangath Toborn, he was probably the second biggest disappointment for me, at least from DoP. He was amazing in the show and considered a powerful warrior, yet his average stats are c/40 p/45 w/40 s/30 and e/30? I wanted to pull a copy of him almost as bad as I had wanted to get Chaor and Maxxor so to have pulled one and to have seen those kinda stats was more than a little disappointing. Sort of how Takinom was pretty good in the show and had fire, but in real life she was sub-par for a super and had no elements. However, Najarin, Takinom, and Tangath were all redeemed with their later scans of TSK, TTIT, and Najarin FF.
ijohn_chaotic

i was really disappointed in takinom because she has no fire attacks! the tcg can be so weird in chaotic

and i dont like how they make some mugic (like fortissimo and diminuendo) so good in the show but so bad in the card game!!!!!!! i use them anyway because they are so classic

but they still suck

and another thing i dislike is when they make cards of awesome creatures, like tangath toborn, but make them suck

dont get me wrong i love the game its just these little things that bug me... sometimes my friends and i make house rules, well not really rules like sometimes we let takinom have fire attacks and make tangath have 50 energy. and i dont like how u can only use the pyroblaster and liquializer once so sometimes we change that too

@BlzvSprayTan wrote:Thing is though, Najarin is a major character, so they needed to make several or them/one's somewhat obtainable in order to please the buyers: not be concise with the show. Just look at Tangath Toborn..

Don't be stupid Maxxor and Chaor are ultra... And LVB if he gets to be Ultra there is no reason Najerin should have been rare.
ijohn_chaotic

Marrillian wrote:Don't be stupid Maxxor and Chaor are ultra... And LVB if he gets to be Ultra there is no reason Najerin should have been rare.