Strategy:
The strategy is only a little different from the first. Basically out of the gate, you get rid of both of your flutes. From here, use Dibanni's ability to put 3 MCs onto Xelfe. Xelfe is now able to cast Unheard melody, and Enre-hep can copy it 3 times, letting you destroy up to 4 creatures. Of course, not all decks will have many creatures without MCs for you to destroy with Unheard Melody. This is why you place Dibanni's counters on Ranun, and then play the deck as if it were Vollkomm v1. The deck is not centered around Unheard Melody like some believe; rather, it is just there in case you want to insta-kill the opposing creatures. Up to you. The shear power of this deck is not seen until you play/think against it. It would take a very strong counter deck in order to beat such a thing, and it is not smart to run a counter deck in a Tournament as I mention on v1's thread.

If you happen to run across the same deck, make sure to put a Mugic Counter onto Gintanai and Ankhyja when your opponent sacrifices his flutes. It will probably stale mate from then on to see which of you uses what Mugic cards, and of course: a bit of luck of the draw on attack cards, and initiative. Remember to focus down Ranun- because he is the only one in this deck to actually be able to support Gintanai in combat. The rest are just there for the openning mugic, and Ankhyja is there in case Gintanai loses a combat. 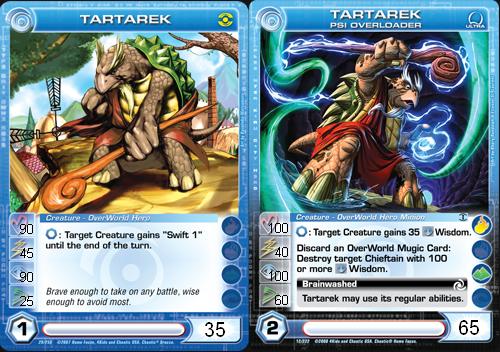 Putting Xerium Armor and Primal Smash aside, I have strong belief that Tartarek Psi Overloader is the best card in the game. I will discuss with you tribe, type, energy, disciplines, elements, abilities, and Mugic Counters.
As far as Tartarek's tribe, it is known to be very strong in the Masters format. Overworld is known for tournament winning decks. Big shots like Nick07 and Antidaeon911 have used such decks in tournaments, and have won many games. Even as so, I believe that Overworld still has untapped power- that's right, somewhere along their cards there is a combination we have not yet discovered, and that is why Overworld makes for a good tribe for Tartarek.
Tartarek Psi is a Hero Minion. Though Heroes do not get many cards, if any, that pertain to them, the Minion type definitely is a bonus for Tartarek Psi. Since he has minion status, he is able to be crafted with Marrillian decks. He is not limited to Overworld or mixed decks. This gives him big versatility and adds to his power as a card.
As far as energy goes, a max of 70 is extremely good. It may not be the 85 on Ursis that everyone is after, but it is above the normal threshold for energy. What threshold? Well, ever since Xerium Armor entered the game, 65 energy has become a threshold for most creatures- why? At 65 energy, it will at least 4 attacks to kill someone with Xerium Armor, whereas it would take at least 3 attacks for someone with 60 energy. Having 70 energy is above and beyond that threshold, making Tartarek an extremely powerful card.
When it comes to Psi's disciplines, they are outstanding. Overworld are known for having wisdom, and perhaps a bit of courage. This usually makes Overworld stronger than the other tribes because the other tribes usually only focus on one discipline. Tartarek is a prime example, maxing at 110 courage, and 110 wisdom. He also maxes 70 speed and 50 power, which are not weak at all when facing speed/power decks. Disciplines on creatures generally range from 30-90 with 60 being the average. That said, 110 courage/wisdom puts Tartarek 50 above the average in those disciplines. This allows him to do damage from Chieftan's Challenge abilities without any extra help!
As far as elements go, it may be Tartarek's worst point; however he still has 2! Fire and Earth are a strange combination, which is my reason for pointing them out as his weakness. Water is best element, by a small margin, because it has more variety in attack cards and abilities(thank you Marrillians for bloating cards with water). Wisdom and water also usually pair up, so it is a shame that Tartarek does not have that element. Still, though, he has earth which will match with courage, and fire for the additional versatility.
When it comes to abilities, Tartarek has some really good ones! When running wisdom attacks in an Overworld deck, you may come across a combat or two where your wisdom isn't quite enough. Tartarek's ability can help with that. More-over-so, his ability to auto-destroy chieftans is quite a strong one! It may be hit or miss for your opponent, but it may even come in handy to destroy chieftans of your own, which is much more reliable.
When it comes to Mugic Counters, this dude has 2! Usually creatures with such strong stats don't have any at all, much less 2. This allows him to cast Nourishing Nocturne on himself, as well as many other card/strategies that require 2 MCs.
And there you have it! Probably the strongest creature card of Chaotic! And oh boy.. look at the picture and see how much of an upgrade he got!

As the M'arrillian's destroy with water, so with fire will I destroy. ~King
All those who oppose shall be destroyed, even if they are not in our way. ~M'arrillian Reign
Sponsored content