You are not connected. Please login or register
Go to page : 1, 2

Cards that have the worst design, even in a single aspect.

For example, Chaor in DOP had a pretty useless ability that is rendered completely obsolete by Refrain of Denial(Red). Not only are there not many Overworld abilities or Mugic that would want to target Chaor, Refrain of Denial takes care of all the Mugic options at only a third of the cost. That's another thing, the cost for such an effect is absurd.

I think Khorror is one of the few who can use Stonemail effectively.

You should have been around in the Silent Sands days. Blazvatan with a Stonemail was actually good enough to be considered unbalanced. Stonemail is actually a great card, not just because it gets rid of abilities such as Recklessness or something like Ixxik's, but 50 energy is a lot to burn even with the 5 additional damage taken. That 50 damage helps supports stay alive to cycle attacks/gives fighters a lot more bulk. You can still move when it's flipped down as well.

@lazerbem wrote:Another card with bad design is Cromaxx. Why did they give him the same ability twice? Unless I'm missing something, having either or would be the same thing 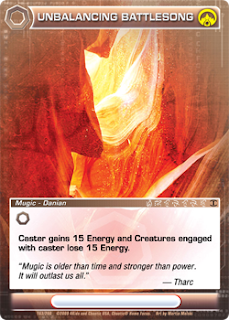 Yeah, so it is a Blackship situation.

When you're posting here keep in mind that the usefulness of a card changes with each new set. Stone Mail in particular was a card which you could put on almost any creature when the game was new, most often seeing use on Chaor.

• Here for a visit? Come say hi to everyone in this topic!
• Got a question that you want answered? The forum staff are here for any and all Chaotic inquiries!
• Do you have an idea to help improve upon the forums? Share it here!
• Got Discord? Join the fun at http://Discord.gg/Chaotic! Don't have Discord? Now's the time!
lazerbem

• Here for a visit? Come say hi to everyone in this topic!
• Got a question that you want answered? The forum staff are here for any and all Chaotic inquiries!
• Do you have an idea to help improve upon the forums? Share it here!
• Got Discord? Join the fun at http://Discord.gg/Chaotic! Don't have Discord? Now's the time!
KingMaxxor4

Fortesimo. Has that ever seen competitive play? It doesn't even boost energy

I wish it had a Gigantrooper effect with a little twist: "Target creatures gains Courage, Power, Wisdom, Speed, Energy, up to 70. (Stats higher than 70 are not effected.)"
But maybe that would have been ahead of its time

As the M'arrillian's destroy with water, so with fire will I destroy. ~King
All those who oppose shall be destroyed, even if they are not in our way. ~M'arrillian Reign
lazerbem

As the M'arrillian's destroy with water, so with fire will I destroy. ~King
All those who oppose shall be destroyed, even if they are not in our way. ~M'arrillian Reign
FinalOne1 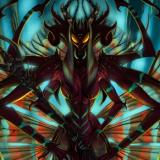 Ulmar's Bionic Steam Arm. I think i never seen someone play it.
KingMaxxor4

As the M'arrillian's destroy with water, so with fire will I destroy. ~King
All those who oppose shall be destroyed, even if they are not in our way. ~M'arrillian Reign
lazerbem

The Mad One
Oracle Afjak

Apologies if I'm beating a dead horse here. I promised I would only do that on blue moons.

Ulmar's Bionic Steam Arms are actually pretty solid in nearly any Gan'trak deck. Fearocity is likewise good despite its quirky element/discipline pairing: usable by warbeasts, quite a few Danians, and even a good many UnderWorlders. Let's not forget that the correlation we have today of two disciplines attributed to each element wasn't exactly established yet; take Unsanity's air damage for example.

As for cards I think were done poorly...
Original Tangath Toborn .
He was among the bravest and baddest dudes of my tribe in the show. I feel like I could file a claim because what they did to his first incarnation was a crime. You needed max courage to use a Ring of Na'arin. You needed at least high power for Elixir of Tenacity. Even with that and max energy, anything stronger than a sniffle from Brathe would have been a one-shot kill. That's not just because Brathe was a legitimate house that I rarely saw used. He could have been and was being easily beaten in single combat by Bodal. BODAL. You know there's something wrong when Perim's future savior is losing most of his battles with a shelf keeper. It took Stone Mail and/or average to minimum energy w/ Melody of the Meek to even make him slightly competitive. Oh wait, Discord if Disarming was a much more common sight back in the day.

Something that didn't make sense to me in the long run was Lake Ken-I-Po . You mean to tell me the dryland tribe who has perfected the most powerful negation Mugic gets punished hardest by the home of their best muge? And the initiative even spits in our faces? When Naj FF is powerless to stop an Unheard that will lead to an Aa'une rampage...

How about Catacollision ? Discount Apoc-eclipse and then we invented Landgore.
Chromatic Postlude if only for the fact that it's more useful in any tribe except the one that created it.

Crown of Aa'une 's significant flaw is that is doesn't begin the game face-up. That is a very big deal. Don't even give me the "You can flip it up with Mugic/abilities" bit. Either you keep a Mipedian around (probably Epitrinne) to cast a Gear Glissando, you wait four score and seven years to draw that Sirroco that's only ever used by me for Ravita Flowers, or you don't use Garv because the Crown doesn't like things it can't mentally dominate. And then you're vulnerable to the not-uncommon problem of Surprising Riffs just twiddling the gear back to dormancy or other Mugic and abilities destroying it outright, not to mention Glissando being dispelled.

I was planning on going down the list alphabetically, but I'll just leave off at Poison Panic . I'm not exactly mad that Invader's Tactics, Kha'rall Crush, Rage of Aa'une, Eidolon Advance, Flood Force, Outfreeze, and Essential Evaporation are all strictly better and lower rarity in terms of damage; I get that the game had power creep over its expansions. I've seen it seemingly hundredfold trying to come back into Yu-Gi-Oh! as the old school troll I was. I intentionally exclude Rip Tide from the list because it was printed twice earlier, but it's strictly better too. But the fact that Panic's outperformed by all of those attacks and has a drawback for making a slight attempt at consistency makes me want to feed myself to Toxis headfirst. Even Iron Balls has more use than this, and they're not even in the same league of attack type.
===== ===== ===== ===== ===== ===== ===== ===== ===== ===== ===== ===== =====

To be fair, Tangath Toborn did go down to Bodal in the show, lol.

I'm rather inexperienced with the card game itself, but I really do not see a point to the attack Gravity Slam. It deals little damage, with its maximum damage requiring an enemy to have no power stat at all, and has a cost of 2, which could easily be spent on other attacks that more consecutively deal as much if not more damage on average. Even Pebblestorm seems more useful, and it requires the user have the right elements.

Speaking of Pebblestorm, I feel that its build cost is unreasonable when you consider the only way for it to get full damage is if the user is proficient at air and earth attacks. Sure, many Mipedians would benefit, but we often see the move (in the show) being used by Overworlders most. Even if it does have the ability to do 10 damage, its cost of a build point makes an inexperienced player such as myself to think it would be more useful to spend that build point somewhere else.

Again, I am still not very good at Chaotic, so what I've said above may well be completely wrong.
hughjk

The show, while generally pretty good at being in line with the card game, was different in some ways. For instance, they didn't make attack decks, so I'm guessing that they had access to every attack that the creature knew when it was scanned, I mean, Hoton? With an Allmageddon? What? So maybe that's why certain attacks were used more liberally then you'd ever see them while actually playing.
bobosmith01

Reguarding the show, there wasn't really any evidence of it, but yes, it's likely the Creature's attacks depended on having an element before performing the attack if said attack includes said element, though I wouldn't be surprised if there was a way for Creature's performing attacks they wouldn't normally know, EX: Terraport, Almageddon, etc...
Sponsored content