INTERVIEW WITH MERLIN P. MANN (an original visionary to Chaotic) 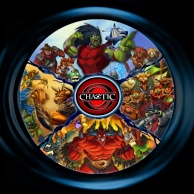 INTERVIEW WITH MERLIN P. MANN (an original visionary to Chaotic)

I recently had the honor to interview Merlin P. Mann about his involvement with Chaotic and its origins. Merlin Mann was very polite and very informative. tell me what you think of the interview.

I understand that one of the very first product you began on your career was Grolls & Gorks. A very specific TCG (trading card game) whiched was a spin-off of Dracco Company Ltd. 's product Dracco Heads 2 which was also produced by Dracco Company Ltd. and Solit Entertainment. This is of course true correct?
if this is in fact true, what was your extensive in the product?
Alsobyou said during a previous conversation between us that during your time on Grolls And Gorks you co wrote the storyline to some of the characters. Which characters do you refer to? also how would you explain your "experience" with working on this product?

Pardon the delay. I was looking through the archives for documents from back then, but it seems I have lost most. I will have to rely on my rather insufficient memory.

So - as far as I recall - I got in touch w/ Martin Rauff while he was reshaping Draccoheads into Grolls & Gorks by adding story, collectible cards etc. I'm not sure when Chaotic was created, but it was the natural extension to G&G.

My first assignment was to do a handfull of cards for the first version of the TCG. Some characters and items.

Martin had worked with an illustrator designing the bulk of world and a background storyline. His idea was to turn the limited concept of collection small plastic figures into an actual concept like Pokemon. And he had the - at that time - rather ingenious idea of printing codes on the trading cards, so you could use them online. This was essentially an early version of Skylanders and very impressive considering how young the www was back then in 2001.

I was not involved in any of the technical stuff or on a concept level. I merely did different writing tasks. For instance a very basic online adventure Fighting Fantasy Style.

At one point Martin wanted to convince Solit Entertainment that the concept needed an animated series and that's when I did one or two test episode mockup drafts.

It never really evolved past that stage while I was on board. I think Solit never really understood the full potential and vision of what Martin was doing. At the same time he was getting involved with a danish tv production company working on entirely different ideas (which at a later point became Barda - a roleplaying themed hit tv show for kids).

It was years later I learned that he had bought the rights from Solit and partnered with 4kids to what became the Chaotic we all know. Exactly what kind of deal was made I dont know as I havent spoken with him since we worked together.

Remember to check me out. I DO WEEKLY VLOGS ON THE ORIGINS OF CHAOTIC, soon i will be posting the vlogs on youtube for those who dont have facebook.

As the M'arrillian's destroy with water, so with fire will I destroy. ~King
All those who oppose shall be destroyed, even if they are not in our way. ~M'arrillian Reign
ElementalDraco218

Remember to check me out. I DO WEEKLY VLOGS ON THE ORIGINS OF CHAOTIC, soon i will be posting the vlogs on youtube for those who dont have facebook.