You are not connected. Please login or register
4 posters

Good question, yes? If you've studied chaotic cards in depth for the past several years now, you'd notice that the Mipedians are seriously lacking; and no, I'm not saying this to make me look better since I use Mips, I'm saying it because it's true. But why, you ask, is this tribe behind all others? Well, let's start with some fundamentals of the game in general.

Tribes were meant to be tribes.
Unlike other games, chaotic separates its creature cards into categories. This currently includes: Overworld, Underworld, Mipedian, Danian, Marrillean tribes, and tribeless. These categories have unique mannerisms in order to differentiate them from others. They also have a unique social system, particularly apparent in Marrilleans.

Overworlders, and Overworld decks, are known for their healing and helping abilities. Signature abilities are ones like Vidav's 'Heal:15', and Arbeid's 'Target attack does 5 damage'. Overworlders have a higher wisdom average than the other tribes and are focused, but not limited to, the water element. Staying alive, and receiving bonuses from friendly tribemates are just what this tribes does.
Underworlders, and Underworld decks, are known for damage(usually in the form of burn) and sacrifice. Signature abilities are ones like Ulmar's 'Expend Fire: Deal 10 damage', and Magmon's Fire 5 and Recklessness 5. Underworlders have a higher power average and are focused on the fire element. BURN is the Underworld way.
Mipedians, and Mipedian decks, are known for having Warbeasts and using Invisibility abilites. Signature abilities like Iflar's 'Invisibility: Strike 20' make up the Mipedian stereotype. Mipedians have a higher speed average and focus around the Air element, with some whereabouts of the Earth element. Strike, surprise, Conjuror/Warbeast combos are what you will see in every Mipedian deck.
Danians, and Danian decks, are known for their teamwork in the form of Mandiblor union, compost, and infection. Signature abilities include Makanaz's 15 energy gain, Nimmei's 5 energy and discipline boost for each mandiblor you control, and Topar's Infect target creature when it is your turn. Danians have a higher courage average, and are centered around the Earth element, with the somewhat common appearance of the Water Element.
Marrilleans, and Marrillean decks, are known for their breakdown into 3 types of cards: Chieftan, Kha'rall, and Fluidmorpher. Marrilleans live and breath on the Water element, and Chieftan cards the the unique ability of accessing the Brainwashed ability on Minion cards. Finding a balance between helpers(fluidmorphers), hybrids(chieftans) and fighters(kha'rall) will make you a reliable Marrillean deck.
Tribeless, only comprised of four different creatures, are associated with being strong cards and usually have an Earth element.

You see what is wrong here? Perhaps not, but that is why I have to go into further detail.

There are three basic creature types.
I mentioned above three basic creature types, and that is: fighter, helper and hybrid. Fighters are creatures that are made for combat: they are strong, and have the disciplines or elements to land your attacks. Helpers are creatures not fit for combat, but instead are made to improve your fighter's combat abilities. Hybrids are creatures that fall in between these two types, that are neither super strong, nor super helpful. Creatures like Intress NF, Lore AC, or Kaal would be hybrid cards.

Ah, there you have it. There's what is wrong with Mipedian cards. Still haven't caught on yet? Let me help you out. Mipedians have no good hybrids.

Quickly think of all the Mipedians that both help others AND are fit for combat. Have you made a list? Let's see if it's the same as mine:
Owayki
Headmaster Ankhyja
Did I list more than you could? Probably. And it's obvious now why we see the above to cards in Mipedian decks so often. Did you list more than me? Well think about it. Is Taffial or Marquis Darini fit for combat with today's standards? Do you see an average Taffial being able to hold out against an Ursis? Sure there's the occasional combo to make your helpers fighters, but that doesn't make them a hybrid. So is there hope?

Malvadine King's Herald
This Fire and Stone Mipedian which was never released was a step in the right direction. 65 energy, air 5 and defender puts him smack dab between helper and fighter. It's not the 70+ energy you're used to seeing on the regular combatant, but 65 is a heap higher than a Muge would have. Is the hype on Malvadine KH correct? Well, he's not a pro fighter like many people picture him to be, but he is a pro hybrid.

What needs to happen in the long term
As I mentioned, Mipedians are based around Invisibility abilities and the Warbeast/Conjuror combo. This is too basic. Danians have 3 styles to play, Overworld and Underworld have a very generic style that can be used in several ways, but Mipedians are very restricted.

What the Mipedians need is a third mannerism, another way to play Mipedians so that it can make the tribe more diverse, more useful, and ultimately have a wider range of play styles. So perhaps under a revival, Mipedians will get their turn in the spotlight.

Are you bored after reading that rant? Good. Go try to make a creative Mipedian deck to ease your boredom, trust me: the tribe needs you to be creative.
KingMaxxor4

No what the tribe needs is better cards

Here is some start of a combo?
Air Water Mipedian deck. Inner flood cycle. Twister of Elements. Warriors of Owayki. Conjerer with fighters having Rivita's flowers? (Or have Conjerer with Warriors)This is starting to sound good, but we have a problem. No way to turn up these gears... And Warriors has the audacity to flip itself down...
It would definitely be a surprise to most opponents for sure. If you are just stacking up mugic on some mid row creature, bring it into combat and boom burn 60 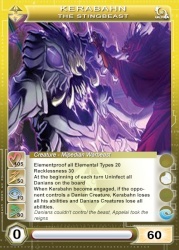 the new malvadine is an awesome fighter! 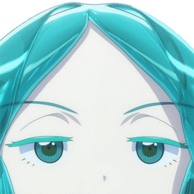 You may not like the sound of this, but in my opinion the Mipedians are exactly where they belong. The idea behind the Mipedians has always been to hit hard and fast, but not be able to play the long run. This shows in every aspect of the tribe; strike, warbeasts, lack of mugic counters on fighters, etc. When every tribe starts to gain the strengths of the others then the lines between tribes becomes blurred.

What you want to do is play another tribe without leaving the Mipedians.
BlzvSprayTan

Blitser wrote:The idea behind the Mipedians has always been to hit hard and fast, but not be able to play the long run.

And then there was AU.. where everyone who's anyone has Xerium Armor in the center of their deck. Kolmo's the best Disarm, and he doesn't exactly pack a punch... I would agree with you Blitz that Invisibility makes them good one hitter quitters, only if Xerium didn't exist. I'm not so sure you ever saw my Apprentice strike deck, but it consisted of Ankhyja with Apron, Iflar with Xerium or something else, Kolmo with Xerium or something else, along with 2 Owaykis and a Taffial. I once wiped 5 of 6 creatures in a starter deck with one shots; the deck didn't put up much fight with Xerium wearing fighters in other decks though.

And Blitz you have to agree there are no Mipedian Hybrids, and having hybrid cards do not 'portray' onto the unique abilities of other tribes.

King, Otinee is about the only decent Mipedian with water. I've experimented with Mipedian water decks, and frankly they're just odd. And I think you mean Interthink instead of Inner Flood, because WoO gives all of your Mipedians the ability.
KingMaxxor4

No, you don't pre-get water in Mipedian. You give them water one way or another lol
Blitser

I'd still stick by what I'm saying though, as one card does not merit a renewal of an entire tribe; and if a single card ever did then it would be that card which needs changing. That said, battlegear is easy to deal with in a numbers of ways.

Counters do happen I'm afraid. Back in the DoPS days Opto was literally a 100% counter to Mipedian decks, and was pretty brainless to use. He still is, to this day actually. Forest of Life During Aichlyys is similar as well. Worst case scenario with Xerium is you do a consistent 20 damage every attack.
BlzvSprayTan

Who runs Opto Blitz? lets be real here: Xerium decks out number Opto decks... by more than a significant amount.

Just saying, there are things which are worse. P:

As an aside, I used to run a rather fun Opto deck myself. Gave recklessness 20 to the opponent, got rid of their gear, and could stop invis while I kept it. All in a 3v3 deck.
KingMaxxor4

King I thought you saw my Xelfe/Ixxik/Enrehep deck.. gave up to 45 recklessness. It was in Blizzy's weekly.
KingMaxxor4

But that's not an opto deck...
BlzvSprayTan

But it's a Xerium deck...
KingMaxxor4

There is no such a thing as an "Xerium Deck" - but a recklessness deck exists. And I remember that build it was sweet!
BlzvSprayTan

Ok ok, it was a deck with Xerium...
Sponsored content